Railroads of Arizona, Vol. 6: Jerome and the Northern Roads Add to wishlist

Too low to display

Cloth with dust jacket, 8.5×11, 248 pages, 235 photos, 28 maps, bibliography, index. 2010. “This addition to Myrick’s renowned series on Arizona railroads covers the great copper operation at Jerome, and a number of roads in the northern part of the state, including the still-operating Grand Canyon Railway. The Grand Canyon trackage was for many years a Santa Fe branch, and serves a tourist railroad today. Both the construction history, as well as the story of the line’s revival in the 1990s, are thoroughly covered here. “Jerome was served by four railroads at various times, most notably the Verde Tunnel & Smelter Railroad, a property of United Verde Copper Company, the primary mining producer at Jerome. Also noteworthy was the United Verde & Pacific narrow gauge, which has its own chapter here, as does the United Verde Extension Railroad. Both are part of the complex railroad history of the Jerome area. “Another road serving the Jerome area was the Verde Valley Railway, long a Santa Fe branch, and active today as both the Arizona Central (for freight) and Verde Canyon (tourist trips). Thoroughly documented here are several shorter-lived railroads which served mining camps, including the Arizona & Swansea, Arizona & Utah, the Mohave & Milltown, and the narrow gauge line serving Ryan. Notable occurences in the mining camps are described too. Also presented are the modern coal-hauling roads, the Coronado and the Black Mesa & Lake Powell railroads. ” Even some of the famous unbuilt railroad proposals, like the Arizona Northern and the Intermountain, St. George & Grand Canyon, have their place in the story, and their history is here. As is typical of Myrick’s work, these railroad histories encompass the histories of the towns and regions they served, providing a lively and detailed view of the history of pioneer Arizona.

Be the first to review “Railroads of Arizona, Vol. 6: Jerome and the Northern Roads” Cancel reply 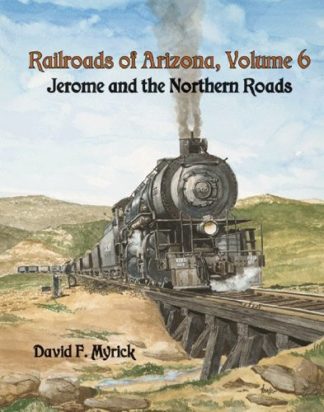