8444 is one of only 2 steam engines that have been in continuous operation in North America (the other is Southern 4501). Watch the best run pasts chosen from 15 years of shooting on Sherman Hill – with breathtaking views from both the ground and air – while listening to the rich history of the Union Pacific rail lines on this famous grade.

The DVD captures 8444 between fan trips in the 1960s and 70s, hauling both revenue freight and passenger service, and features a singular event when 8444 pulled “The City of St. Louis” from Denver to Cheyenne. Follow this unique trip from both trackside and in the cab. She also steams from Rawlins with a 105 car way freight. 8444 then takes the UP hotshot “Northwest Forwarder” Cheyenne to Rawlins non-stop with 78 cars. She is part of the Union Pacific’s “royal family of steam.” Catch the intrepid 8444 hard at work! 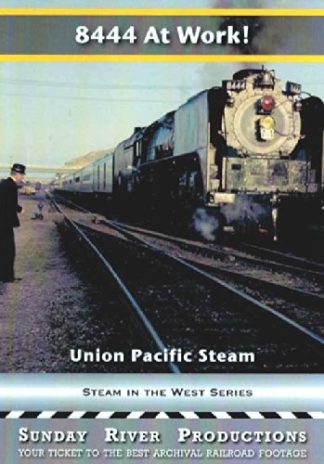