Whistle-stop posts along a picturesque cycling trail. An abandoned roundhouse in a new industrial park. A piece of “Black Diamond” anthracite coal lying in the grass. These are silent witnesses to the golden age of American railroading, 1946, when the steam locomotive’s sonorous whistle could be heard from Pennsylvania to Vermont, from New York to Chicago.

The second installation of Richard C. Carpenter’s highly acclaimed series covers an area criss-crossed by some of the oldest railroad lines in America. This volume includes over 191 beautiful, hand-drawn maps of rail systems in New York, Connecticut, Massachusetts, Rhode Island, Maine, New Hampshire, and Vermont. These masterpieces, accompanied by detailed sections on stations, track pans, tunnels, and viaducts, capture a time when rail was king in New England, before cars, trucks, and planes became dominant.

Be the first to review “A Railroad Atlas of the United States in 1946: Volume 2: New York & New England (Creating the North American Landscape)” Cancel reply 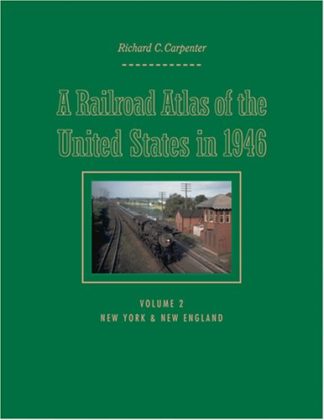 You're viewing: A Railroad Atlas of the United States in 1946: Volume 2: New York & New England (Creating the North American Landscape) $72.00
Buy product
Someone in purchased