Huffington Post called him “a master of the abandoned”—and for good reason. The “artivist” known only as Seph Lawless has spent the last ten years photo-documenting the America that was left behind in the throes of economic instability and overall decline—decrepit shopping malls, houses, factories, even amusement parks.

Through nearly two hundred gorgeous and elegiac photographs, Abandoned details Lawless’s journey into what was once the very heart of American entertainment: the amusement park. Lawless visits deserted parks across the country, capturing in stark detail their dilapidated state, natural overgrowth, and obvious duality of sad and playful symbolism. Previously self-published as Bizarro, this updated edition of Lawless’s photographic tribute to decaying American amusement parks contains new content and a new foreword.

For the first time, the famed photojournalist Seph Lawless makes his moving work available in a stunning trade edition. 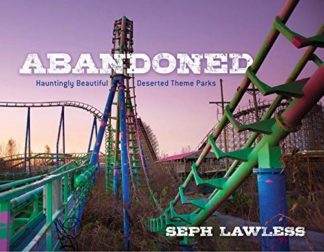