On June 1, 2008, AT&SF 3751 made its first trip from Los Angeles to San Diego in 55 years and Pentrex was on the spot with multiple camera crews using the latest in high-tech equipment to bring you the best possible coverage of this exciting event. Using our famous aerial photography as well as trackside and onboard cameras, we were able to capture the train from all angles – and we do mean all! We were able to get some truly incredible shots! The powerful 4-8-4 Northern never looked better as she headed south along the beautiful Southern California coast.

The skies were clear and sunny as the 3751 departed Los Angeles at the head of its 10-car train. The Amtrak unit behind the 3751 was placed in reverse mode for the turn-around in San Diego and to provide head end power for the cars. Otherwise, the special was pulled entirely by steam. Our camera crews had the train well covered as it followed the west side of the Los Angeles River, past Amtrak’s Redondo Yard, and headed east to Fullerton and then to San Juan Capistrano. A photo run-by for passengers took place at the Poinsettia Station where the thirsty Baldwin stopped to be watered and serviced before proceeding to San Diego.

Leaving the shores of the Pacific Ocean, the oil-burning 81-year old steamer filled the canyons with a throaty exhaust as it tackled the 2.2 percent grades of Miramar Hill. In a scene reminiscent of the glory days of steam, the 3751 pulled into San Diego’s classic Mission Revival style station where fans of all ages were waiting to greet the train. Our special coverage of this historic excursion also includes some rare in-cab footage of the 3751. There’s nothing quite so thrilling as the sights and sounds of big steam on the rails again and Pentrex has captured all that excitement for you in Above 3751 to San Diego! 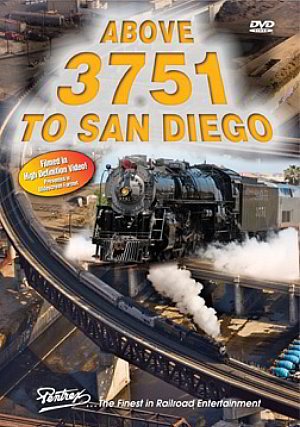