America’s Greatest Circus Train, a 208-page hardbound, is authored by Bruce Nelson, a career transportation professional and historian. This all-color 10” x10” book brings back the days when the colorful Circus Train ran from the Circus World Museum in Baraboo, Wisconsin, through both Wisconsin and Illinois, delighting thousands of spectators. The new book features 335 mostly color photographs and illustrations, and has been in development for more than 10 years.

In text and photographs the book captures the color and excitement of the Circus Train, how it originated, its passengers, contents, loading and unloading of wagons, rail routes and planning, and finally how it faded away. “Railfans, circus enthusiasts, former spectators at the Circus Parades and children of all ages will appreciate the detailed documentation this volume presents,” says Don Heimburger, publisher.

The steam- and diesel-operated Circus Train was the source of the historic circus wagons used in the Milwaukee and Chicago circus parades that drew millions of spectators between 1965 and 2003. Over the years, the train consisted of up to 29 vintage cars carrying hundreds of guests and almost 90 historic horse-drawn wagons. Pulled at times by restored steam locomotives and at others by the most modern of diesels, the train operated over six different railroads using eight primary routes covering hundreds of miles per year. People in towns and cities all along the train’s route anticipated the annual event. The Circus Parade was once the highlight of the summer season in Milwaukee, capturing the imagination of adults and children throughout the surrounding states and the world.

Like the days of yesteryear, when a number of carnivals and circuses moved across the country by rail, the Museum’s Circus Train presented an image of the past, thrilling crowds wherever it went. The Circus Parade—and later the train—began when a major sponsor, the Jos. Schlitz Brewing Company of Milwaukee, agreed to underwrite them.

The Circus Train first appeared with its vintage cars in 1965, and ran until 2003, with several lapses. During the years, the train was routed over several railroads in Illinois and Wisconsin, including the Milwaukee Road, the Chicago & North Western, the Wisconsin Central, the Canadian Pacific, the Canadian National and the Wisconsin & Southern. “The trips required an inordinate amount of planning by the Museum and the railroads,” says author Nelson, including running time, stops and viewing locations, meeting schedules, obtaining water for the steam-operated runs, and care of the wagons and animals.

The new book contains a Foreword by Fred Dahlinger Jr., one-time director of the Robert L. Parkinson Library and the Research Center at the Circus World Museum, and a well-known circus historian. Dahlinger is now curator of circus history at the John and Mable Ringling Museum of Art in Florida.

The Circus World Museum, operated by the Wisconsin Historical Society, began in 1959 to collect, preserve and present circus history. Today the museum owns the foremost collection of large circus and carnival pieces in the United States, including wagons, railcars and memorabilia. It also owns the former Ringling Bros. Circus railroad car shops in Baraboo. 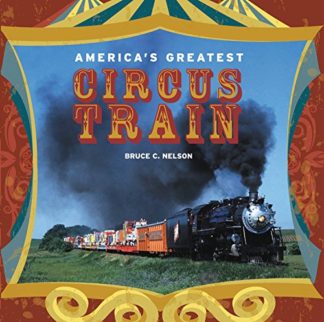