With our camera mounted on the lead engine of a BNSF train, we’ll take to the rails to bring you a spectacular and unique perspective of railroading like no other! At the Throttle, Volume 3 is dedicated to train meets, the exciting encounter of two opposing trains traveling on parallel tracks. You’ll travel throughout Southern California to experience meets with freight, commuter, and passenger trains at a variety of locations, including the Alameda Corridor and the BNSF’s San Bernardino and Cajon Subdivisions.

This is no conventional cab ride. As you travel the rails, you’ll view meets from many intriguing angles. Our camera is sometimes mounted at the wheel, on the coupler, at the front of the cab, even on top of the engine! These images were not only shot during daylight; there are many fascinating night scenes as well. You’ll see meets with Union Pacific, KCS, BNSF trains and Amtrak’s Southwest Chief and Pacific Surfliner, plus a drag race on the climb to Summit. There’s a good mix of motive power to savor, such as AC 4400 CWs, Dash 944 CS, GEVOs, and Amtrak’s P42 DCs. The main thrill, however, is the feeling of being right there, just above the rails, with the ground shaking and the wind whipping as another long train slips past you. Enjoy the adventure — you’re At the Throttle! 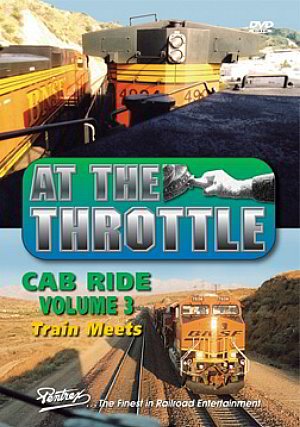 You're viewing: At The Throttle Cab Ride Volume 3 Train Meets [DVD] $24.95
Buy product
Someone in purchased