Hop on board! We’ve got a first class ticket for you to ride a BNSF doublestack train on the Alameda Corridor! From Hobart Yard in Los Angeles to the ports of Los Angeles and Long Beach and back again, including Terminal Island and Pier 400, you’re about to witness a line that few are privileged to see. So get ready. You’re about to experience the Alameda Corridor! Highlights of the trip include appearances by Pacific Harbor Line locomotives, a passing UP stack train, and more. This is a railroading adventure like no other!

The congestion generated by heavy BNSF and UP trains moving freight in and out of the ports led to construction of a 20-mile long consolidated route linking the railroads’ container facilities near Los Angeles to the harbor area. The central feature of the Corridor is the Trench, a 33-foot deep, 50-foot wide, 10-mile long cut that carries trains below grade crossings. With an average close to 70 trains a day, the Corridor is a busy place, as you’ll see on three separate outings.

Your first trip begins near Eastern Avenue on a cool, overcast October morning in 2007. After passing Hobart Tower, you enter the Trench at 25th Street, return to ground level 10 miles later in Compton, ending your trip at Delores Yard. Your second trip takes you from Watson Yard to Terminal Island where your consist will traverse a giant balloon track to keep your lead unit on the point before coupling to a waiting train. For the third trip, you’ll depart from Pier 400 for the return trip back through the Trench. This time the camera is mounted on the second unit to give you a different perspective. 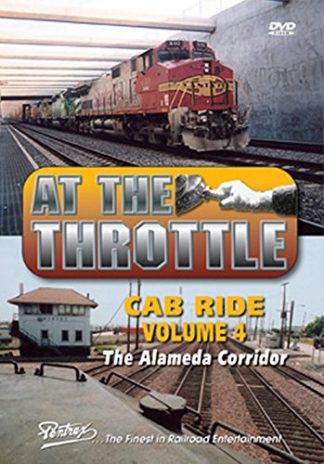 You're viewing: At The Throttle Cab Ride Volume 4 The Alameda Corridor [DVD] $19.90
Buy product
Someone in purchased