At the Throttle Volume 5 takes you to Southern California’s scenic Surfline, primarily in San Diego and southern Orange Counties, to enjoy images of railroading that few ever experience. With our camera mounted inside and outside the cabs of several different BNSF locomotives, you’ll get to see the railroad not only from the engineer’s perspective but from other interesting angles and placements as well. For many miles, the Surfline skirts along the blue waters of the Pacific Ocean, giving riders, and us, a spectacular view of California’s coast.

You’ll start your journey on board a San Diego-bound BNSF freight and then you’ll make several trips in both directions over scenic portions of the line. Among the familiar landmarks you’ll pass are the San Clemente Pier, the Carlsbad trestles, San Onofre, Oceanside, Leucadia, Del Mar, the climb up Miramar Hill, and the city of San Diego.

For the most part, our cameras are mounted at various positions on Dash 840 CW and C44-9W locomotives hauling BNSF freights, on the lead units and also on following units. These heavy, hard working engines take us past meets with Amtrak’s Pacific Surfliners and North County Transit District’s Coaster and Sprinter commuter trains. At the Throttle Volume 5 is not your traditional cab ride; it’s a totally unique journey along one of the most scenic lines in America! 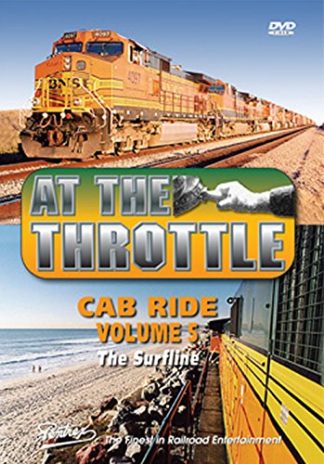 You're viewing: At the Throttle Cab Ride Volume 5 The Surfline [DVD] $24.25
Buy product
Someone in purchased