At the Throttle, Cab Ride Volume 6, A Railroader’s Perspective Add to wishlist

Pentrex cameras have been placed on top of, in front of, inside, behind, and even underneath many BNSF consists traveling SoCal tracks. Here is Volume 6 of the exciting At the Throttle Cab Ride series! In this program, we’ll show you a railroader’s perspective and a whole lot more as we once again take to the rails in Southern California. Not only is this production the longest of our At the Throttle shows, it’s the most varied. There are many shots and perpectives – always something new as you watch the show.

Starting off on the San Bernardino Subdivision, we move to Barstow, Cajon, Hobart Yard, Santa Ana Canyon, the Harbor Sub, the Alameda Corridor, and many other busy areas. The really unique aspect of this coverage comes from the way you’ll see the tracks, the trucks and axles, and surrounding terrain as the trains go about their duties. Some of the camera placements include roof mount on the lead and rear engines; on the knuckle; underneath, inside, and on top of the steps; on the cars; inside the cabs; and even between the rails as the train rolls overhead. This gives you a chance to experience railroading in a way no other program can provide. It’s an exciting way to live life on the rails close up and personal. Join us for a rare adventure in “At the Throttle Cab Ride Volume 6 – A Railroader’s Perspective”!

Be the first to review “At the Throttle, Cab Ride Volume 6, A Railroader’s Perspective” Cancel reply 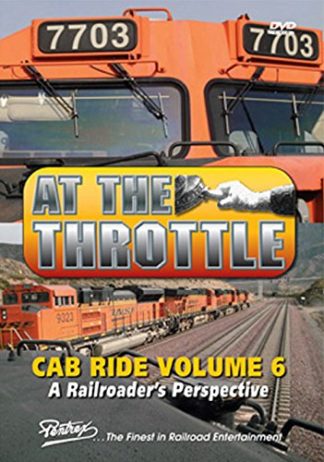 You're viewing: At the Throttle, Cab Ride Volume 6, A Railroader’s Perspective $25.87
Buy product
Someone in purchased