Weighing in at one and a quarter million pounds, measuring 132 feet long, Union Pacific Big Boys were the giants of the rails. Just 25 Big Boys were built and they only remained in service for 18 years before the end of the steam era. Yet their power and performance make them as popular today as in their own day. This Big Boy Combo DVD (Part 2) brings you two viewing treats: a Pentrex documentary focusing on Big Boy operations over Sherman Hill and a 1950s television drama about a Big Boy engineer.Last of the Giants Volume 3: Sherman Hill (70 Minutes)Allan Krieg, writer and director of Last of the Giants, shares the challenges his camera crews faced while capturing the Big Boys on film. Scenes of the running gear in motion, shot from a camera car on a parallel track, and pacing sequences of the Big Boys on the road are thrilling to see. You’ll ride in the cabs and watch the firemen and engineers at work. Interviews with surviving crewmembers give you a sense of what it was like to run these giant engines over Sherman Hill. All the scenes shown in this production are compiled from 16mm color film shot between 1955 and 1958.Big Boys on TV (70 Minutes)Ed Begley stars in this 1950s NBC Lucky Strike Theater drama about a Big Boy engineer who is struggling with fears about his future. The live broadcast takes you right into the heart of this railroader’s life at home and in the cab of his Big Boy. Pentrex incorporated some of the original footage shot on location showing Big Boys on Sherman Hill and in the Cheyenne yards. (It’s all new material, not used in other Pentrex videos.) We also included the old commercials that aired with the broadcast. They will make you smile. This is a program the whole family can enjoy. 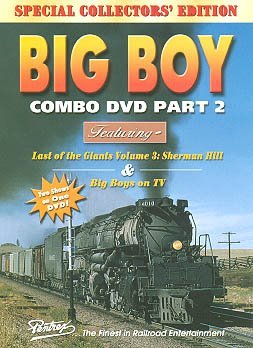