BNSF’s Seattle Subdivision is one of the busiest rail lines in the Pacific Northwest. BNSF and Union Pacific polish the rails with a great variety of unit trains plus intermodal, mixed merchandise, and many locals.In addition to freight traffic, the busy subdivision hosts ten Amtrak trains: four Cascades each direction, plus the north and southbound Coast Starlight. Between Tacoma and Seattle, Sounder commuter trains are also added to the mix. See this beautiful line between Vancouver, Washington and Seattle’s King Street Station. The rails provide access to the busy ports of Kalama, Longview, Tacoma, and Seattle. Watch trains tackle the Napavine Grade to Chehalis. The scenic highlight of the route is the section of track along the Puget Sound between Steilacoom and the Nelson Bennett Tunnel at Tacoma. Amtrak trains are covered here prior to being permanently rerouted over the Point Defiance Bypass. Shot in the summer and fall of 2017, see why BNSF’s Seattle Subdivision is truly a railfan’s paradise! 2 Hours 13 Minutes Stereo Sound Narration on/off 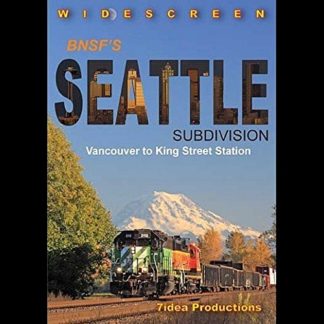