Branch Line Empires: The Pennsylvania and the New York Central Railroads (Railroads Past and Present) Add to wishlist

The Pennsylvania and the New York Central railroads helped to develop central Pennsylvania as the largest source of bituminous coal for the nation. By the late 19th century, the two lines were among America’s largest businesses and would soon become legendary archrivals. The PRR first arrived in the 1860s. Within a few years, it was sourcing as much as four million tons of coal annually from Centre County and the Moshannon Valley and would continue do so for a quarter-century. The New York Central, through its Beech Creek Railroad affiliate, invaded the region in the 1880s, first seeking a dependable, long-term source of coal to fuel its locomotives but soon aggressively attempting to break its rival’s lock on transporting the area’s immense wealth of mineral and forest products.

Beginning around 1900, the two companies transitioned from an era of growth and competition to a time when each tacitly recognized the other’s domain and sought to achieve maximum operating efficiencies by adopting new technology such as air brakes, automatic couplers, all-steel cars, and diesel locomotives. Over the next few decades, each line began to face common problems in the form of competition from other forms of transportation and government regulation; in 1968 the two businesses merged.

Branch Line Empires offers a thorough and captivating analysis of how a changing world turned competition into cooperation between two railroad industry titans.

Be the first to review “Branch Line Empires: The Pennsylvania and the New York Central Railroads (Railroads Past and Present)” Cancel reply 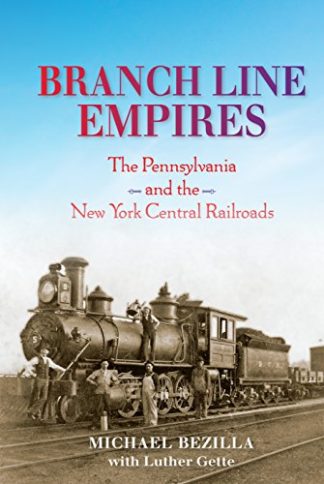 You're viewing: Branch Line Empires: The Pennsylvania and the New York Central Railroads (Railroads Past and Present) $39.42
Buy product
Someone in purchased