Bucking the Railroads on the Kansas Frontier: The Struggle Over Land Claims by Homesteading Civil War Veterans, 1867-1876 Add to wishlist

As the Civil War ended, thousands of Union veterans imagined Kansas as a place to make a new beginning. Many veterans settled in the southeastern part of the state. In their struggle to establish lawful, ordered communities the settlers came into conflict with railroads intent on building through southeast Kansas to reach warm-water ports in Texas. To the settlers the railroads represented both a promise and a threat. By linking farmers and businessmen with eastern markets, the railroads guaranteed the prospects of economic gain. However, when they claimed rights to the land that settlers had already claimed, railroad monopolies were identified as a new manifestation of the same threat to republican values they had fought against in the recently concluded War. This book tells the story of the settlers’ opposition to and victory over railroads and the impact on the evolution of political thought in Kansas and the American west.

Be the first to review “Bucking the Railroads on the Kansas Frontier: The Struggle Over Land Claims by Homesteading Civil War Veterans, 1867-1876” Cancel reply 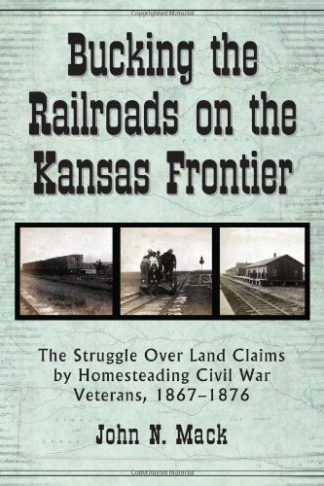 You're viewing: Bucking the Railroads on the Kansas Frontier: The Struggle Over Land Claims by Homesteading Civil War Veterans, 1867-1876 $45.00
Buy product
Someone in purchased