Once leading the country’s finest passenger trains on high-speed schedules, the last remaining fleet of Electro-Motive E-units worked during their later years pulling commuter trains in Chicago. Pentrex filmed these timeless machines in the early 1990s, capturing their sleek lines and throaty exhaust in exciting line-side action and thrilling cab ride footage just before they were retired from Metra duty. For a nostalgic look at rare power actively still at work and the engineer’s view of the route they travel, treat yourself to Burlington Northern E-Units, Along the Racetrack!

Climb up into the cab of BNE-9 #9914 and ride the entire line from Chicago’s Union Station out to Aurora. Watch as the engineer skillfully brings the machine from notch 8 to a screaming stop at stations along the line. Listen as the throttle is ratcheted through the notches and the dual-engine machine responds with rumbling exhaust talk. You’ll get a view of the triple track BN mainline as you’ve never seen it before! The afternoon Dinky Parade, as the railroaders call it, is a dispatcher’s nightmare, with train after train scheduled for action. The route to Aurora is filled with curves, bridges, and scenic stations and many thrilling meets occur as you speed down the “racetrack.”

Be the first to review “Burlington Northern E-Units: Along the Race Track (Pentrex) [DVD]” Cancel reply 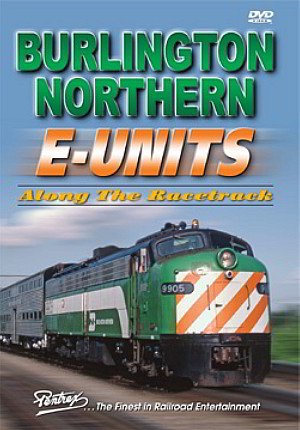 You're viewing: Burlington Northern E-Units: Along the Race Track (Pentrex) [DVD] $19.95
Buy product
Someone in purchased