In 1994, Pentrex went on a tour of discovery along CSX branch lines in the coalfields of West Virginia to show you how coal was brought down out of the hollows and moved out to world markets. The beauty of the Appalachian Mountains, the power of the railroad, and the importance of the task are just as riveting today as they were then. Long, heavy trains grinding through curve after curve, powering through daunting grades, loaded with the raw ore that will feed a hungry nation – Pentrex is proud to bring you the story of Southern West Virginia Coal!

Traveling on the Logan, the Big River, and the Big Coal Subdivisions, as well as their numerous connecting subs, you’ll see hard working diesels pull strings of hoppers up stiff grades and twisting branch lines where the cars will be flood-loaded at the mines. Cabooses are still utilized on some trains and rear-end pushers can be seen on others. Following the loaded trains out of the coalfields, you’ll visit a rail-to-river transfer facility where a rotary dumper quickly unloads the “black diamonds” into barges.

An interview with Tim Hensley, CSX Resident Vice-President for West Virginia, provides intriguing insight. Mr. Hensley was once a locomotive engineer and he reflects on his personal experience and the significance of these coal operations to the railroad and the state. The action never ceases for CSX as it meets the challenge of the coalfields of Southern West Virginia. 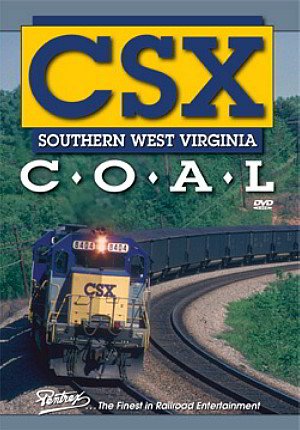