The Denver & Rio Grande Western means rugged, spectacular mountain railroading, heavy freight hauling, and terrific action shots. That was especially true in 1986 when this show was originally filmed. At that time, the D&RGW was still an independent entity and most of its trains were pulled by pure sets of Rio Grande power, many with cabooses. Units from Burlington Northern, Southern Pacific, and Missouri Pacific could also be seen with run-through trains. This is the modern, independent D&RGW, pre-merger, a great time to tour the railroad.

Join Pentrex as we cover the entire Denver to Salt Lake City mainline. Savor the thrill of a cab ride up the Front Range to Moffat Tunnel. Travel to Winter Park to see the Ski Train with its heavyweight coaches. Watch Rio Grande, Santa Fe, and Burlington Northern trains share operations on the Joint Line between Denver and Pueblo. Climb the awesome slopes of Tennessee Pass to the 10,000-foot summit; then descend into the Royal Gorge with its sheer rock walls. Filmed throughout the four seasons of the year, this show brings you the beauty of the Rio Grande terrain and all its nonstop action, including the Rio Grande’s business cars, Amtrak, and plenty of freights. It’s a fantastic trip!

Bonus footage: A 23 minute cab ride through the Royal Gorge. 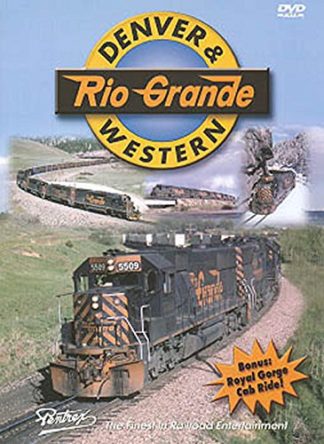