Don’t miss out on the first U-boats as they ply Southern Pacific rails. These GE locomotives had some problems. But GE eventually worked their way to the top of the locomotive business by pecking away at EMD. See FM and ALCo and many rare Southern Pacific units.

See the greater San Francisco Bay Area, Los Angeles environs, Glendale’s old Taylor Yard, Colton Crossing, and many extinct branchlines. See the opening of the new Colton Yard and the building and early days of the Cajon Pass line for the SP and its bypass of Los Angeles for north-south through-traffic. Passenger and freight trains abound. Special Shasta, Cascade and even Kaiser ore trains from Iron Mountain near the Salton Sea – plus great and extensive Cajon Pass and Tehachapi action and much more.

And the reviews are great: To quote Railfan & Railroad magazine, “.the quality and depth of the information in the narration is so great. A must for SP fans I would think, as well as students of motive power evolution, use and disposition.” And Model Railroad News says, “Smiley, as usual, pulls from unfathomable depths of footage to locate and select delightful pearls of 8 and 16mm footage.” 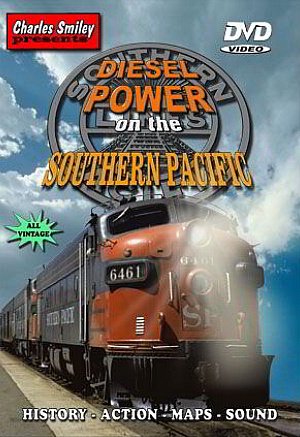