Food on the Move: Dining on the Legendary Railway Journeys of the World Add to wishlist

All aboard for a delicious ride on nine legendary railway journeys! Meals associated with train travel have been an important ingredient of railway history for more than a century—from dinners in dining cars to lunches at station buffets and foods purchased from platform vendors. For many travelers, the experience of eating on a railway journey is often a highlight of the trip, a major part of the “romance of the rails.”

A delight for rail enthusiasts, foodies, and armchair travelers alike, Food on the Move serves up the culinary history of these famous journeys on five continents, from the earliest days of rail travel to the present. Chapters invite us to table for the haute cuisine of the elegant dining carriages on the Orient Express; the classic American feast of steak-and-eggs on the Santa Fe Super Chief; and home-cooked regional foods along the Trans-Siberian tracks. We eat our way across Canada’s vast interior and Australia’s spectacular and colorful Outback; grab an infamous “British railway sandwich” to munch on the Flying Scotsman; snack on spicy samosas on the Darjeeling Himalayan Toy Train; dine at high speed on Japan’s bullet train, the Shinkansen; and sip South African wines in a Blue Train—a luxury lounge-car featuring windows of glass fused with gold dust.

Written by eight authors who have traveled on those legendary lines, these chapters include recipes from the dining cars and station eateries, taken from historical menus and contributed by contemporary chefs, as well as a bounty of illustrations. A toothsome commingling of dinner triangles and train whistles, this collection is a veritable feast of meals on the move.

Be the first to review “Food on the Move: Dining on the Legendary Railway Journeys of the World” Cancel reply 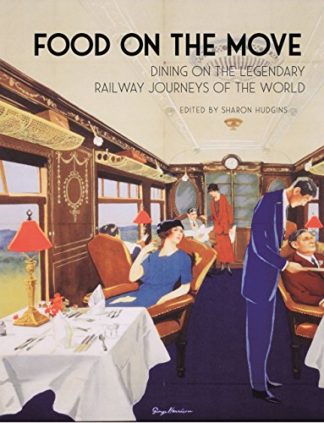 You're viewing: Food on the Move: Dining on the Legendary Railway Journeys of the World $23.12
Buy product
Someone in purchased