The driving of the Golden Spike at Promontory Summit in Utah on May 10, 1869, almost didn’t happen. None of the history books mention this crucial event. Only five people were aware of the incident. Will Braddock knew. He was one of those five. It all started when Paddy O’Hannigan attacked Will; his uncle, Sean Corcoran; and Homer Garcon, in Echo City, Utah, four months earlier. When Will chases after Paddy, the Irish thug traps Will into a bigger mess. Fortunately, Jenny McNabb is around to help Will recover. Paddy, desperate for money, creates more trouble by kidnaping Jenny. Will coerces Mort Kavanagh, Paddy’s godfather, into providing the ransom money. Jenny tries to escape, but Paddy throws her shoes away and forces her to walk shoeless to the ransom rendezvous point. After getting his hands on the money, Paddy unwittingly brags that he is rich. Kavanagh forces Paddy to return the funds, and Paddy is broke again. Jenny accepts employment as a chef for the Central Pacific Railroad’s president, Leland Stanford, who is bringing the Golden Spike to the ceremony in Utah that will commemorate the completion of the first transcontinental railroad. Paddy sneaks aboard Stanford’s train, stabs Homer, grabs the Golden Spike, steals Will’s horse, and races away. Will must pursue Paddy again and regain the spike before the railroad officials discover it’s missing. If he fails, Jenny, Homer, and Will stand to be accused of being the thieves. 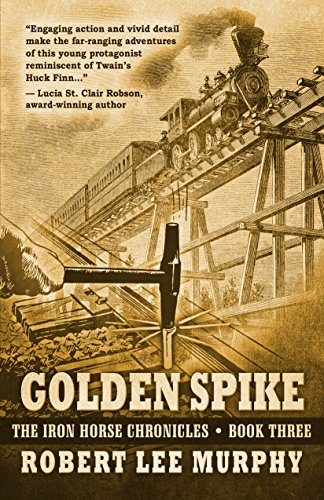 You're viewing: Golden Spike (The Iron Horse Chronicles) $25.95
Buy product
Someone in purchased