A look back on the brief and spectacular history of Canada’s Great Western Railway.

This book chronicles the genesis and all-too-brief existence of one of Canada’s greatest early railways, the Great Western Railway of Canada (1853–1882), a major precursor to the Canadian National Rail system.

Today, the Great Western Railway of Canada is a little-known historic line, overlooked even by many railway aficionados. But it was truly a railway ahead of its time. It was a pioneer in combining land- and water-based transportation, including the introduction of river car-ferries and passenger/freight steamships on the Great Lakes. It made waves of a different kind with its acquisition of the American-owned railway linking Detroit, Grand Haven, and Milwaukee. And its mammoth workshops were industrial monuments in Hamilton and London, Ontario, where inventive geniuses laboured to supply the booming rail trade of southern Ontario.

It was the ancestor of some of the most heavily used rail lines in all of Canada. This book has been written to do justice to a railway that truly must be considered one of Canada’s trailblazing lines. Amply illustrated with previously unpublished photographs and a thorough historical record of the Great Western Railway’s locomotives and rolling stock, it offers a ride back in time into the vanishing history of early Ontario railroading. 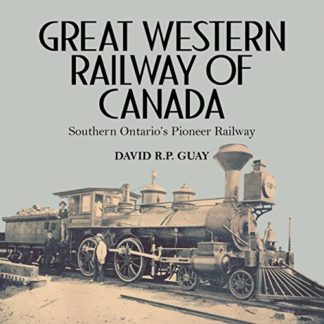