This limited edition hardcover has 272 pages and contains all of the great photographs, maps, text, diagrams and rosters from the four volumes of Hawaiian Railway Album WWII Photographs by Gale Treiber.

Chapter 1 – The Oahu Railway and Land Company, Limited, in Honolulu

Chapter 2 – Along the Main Lines of the Oahu Railway & Land Co. and The Hawaii Consolidated Railway

Chapter 4 – Plantation Railways on Kauai and the Remaining Islands

The first two chapters include mostly steam engines such as Mikados, Ten-Wheelers, Consolidations, but also has centercab diesel-electrics, passenger cars, motorcars, freight cars, cabooses, and a fully-loaded 15-stall roundhouse! There’s and ORL roster plus maps of Honolulu and the OR&L shop complex are included, plus 13 maps of the railroad’s main line. Nearly every one of OR&L steam locomotives is pictured in this book, along with both of their centercab diesels!

The final chapter features plantation railroads on Kauai, Maui and the Big Island of Hawaii, plus 19 rosters, a detailed map of Kauai and photos from Victor Norton’s return home after the War. Photographs include the Port of Nawiliwili, Ahukini wharf, loading operations out in the field, cane flumes, sugar mills, rare diesels and lots of steam!

World War II buffs will enjoy these photos taken by servicemen stationed in Hawaii in the 1940’s. 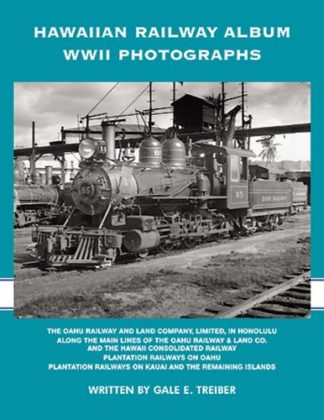