Historic Hot Spots are etched in the minds of those who were there firsthand and revered by those who wish they had been. This amazing collection allows young and old alike to enjoy those wondrous times of transition in American railroading. And the footage is all in color! This combo DVD features: Railfanning Southern California in the 1950s and Santa Fe’s Pasadena Subdivision. Two best-selling programs on one DVD, bringing you images from the 1950s and 1960s, taken at the best train-watching spots in Southern California. Included are:


Railfanning Southern California in the 1950s

Diesels were replacing the last of the mighty steam locomotives on the Union Pacific, Southern Pacific, and Santa Fe in the 1950s. However they were not all gone! You’ll see 4-8-4s, 2-10-2s, and Cab Forwards, as well as EMD E- and F-units, SD9s, Alco PAs and FAs, FM C-Liners, Baldwins and more. Freight and passenger trains are shown at Cajon, Tehachapi, Beaumont Pass, LAUPT, Glendale and Burbank Junction; even over Santa Fe’s Elsinore Branch. It’s one of the most appealing railroad films ever! (60 Minutes)

Santa Fe’s Pasadena SubdivisionStep back to the early 1950s to watch Santa Fe’s elegant streamlined passenger trains El Capitan and The Chief. Gleaming Alco PAs and EMD F-units head up these glamorous trains over the route from San Bernardino through Pasadena to Los Angeles. Ride in the cab of an F-7 on The Chief over Cajon Pass to Barstow, reaching speeds of 95 mph! There is plenty of classic passenger train action in this exciting show! (80 Minutes)

Be the first to review “Historic Hot Spots Combo: Railfanning California in the 1950s and Santa Fe’s …” Cancel reply 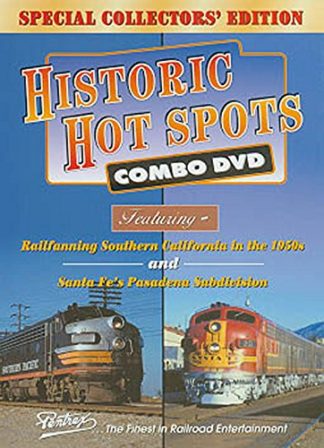 You're viewing: Historic Hot Spots Combo: Railfanning California in the 1950s and Santa Fe’s … $25.95
Buy product
Someone in purchased