House of David, The (MI) (Images of America) Add to wishlist

In 1903, Benjamin Purnell, a long-haired, bearded itinerant preacher, arrived in Benton Harbor. He and his wife, Mary, stepped out of their covered
preacher’s wagon, and gazing across a thriving summer resort, they saw their long-awaited paradise. Acquiring this paradise, they established a religious
colony called the House of David, which grew to over 1,000 members from around the world, with phenomenal talents in music, sports, entertainment, and architecture. A pre-Disneyland-type amusement park was constructed, attracting hundreds of thousands of visitors annually. As the colony’s leader, the very charismatic and convincing Purnell called himself a brother to Jesus, and members flocked in, handing over their homes, wealth, and worldly possessions for the promise of everlasting life, creating huge wealth. Soon they built exquisite mansions, hotels, restaurants, cruise ships, factories, and miniature railroads. Holdings included diamond and gold mines, an island in Lake Michigan, thousands of acres of farmland, an Australian resort, an art studio, orchestras, vaudeville acts, a famous bearded baseball team, and more. This book will take readers on the fascinating journey of the House of David.

Be the first to review “House of David, The (MI) (Images of America)” Cancel reply 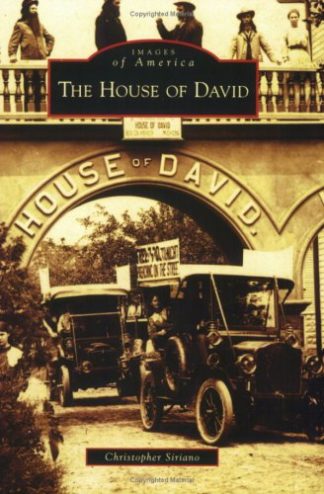 You're viewing: House of David, The (MI) (Images of America) $21.99
Buy product
Someone in purchased