Iron Rails, Iron Men, and the Race to Link the Nation: The Story of the Transcontinental Railroad Add to wishlist

Experience the race of rails to link the country—and meet the men behind this incredible feat—in a riveting story about the building of the transcontinental railroad, brought to life with archival photos.

In the 1850s, gold fever swept the West, but people had to walk, sail, or ride horses for months on end to seek their fortune. The question of faster, safer transportation was posed by national leaders. But with 1,800 miles of seemingly impenetrable mountains, searing deserts, and endless plains between the Missouri River and San Francisco, could a transcontinental railroad be built? It seemed impossible. Eventually, two railroad companies, the Central Pacific, which laid the tracks eastward, and the Union Pacific, which moved west, began the job. In one great race between iron men with iron wills, tens of thousands of workers blasted the longest tunnels that had ever been constructed, built the highest bridges that had ever been created, and finally linked the nation by two bands of steel, changing America forever.

Be the first to review “Iron Rails, Iron Men, and the Race to Link the Nation: The Story of the Transcontinental Railroad” Cancel reply 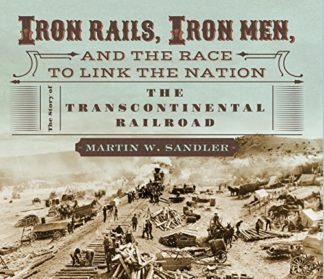 You're viewing: Iron Rails, Iron Men, and the Race to Link the Nation: The Story of the Transcontinental Railroad $17.19
Buy product
Someone in purchased