Step back to 1990 and tour the entire Kansas City Southern Railway system from Kansas City, Missouri to Port Arthur, Texas and over the former Louisiana & Arkansas line from New Orleans to Shreveport and across the Texas Division towards Dallas. Thrilling action on the KCS reveals heavy coal and grain trains snaking through the Ouachita Mountains in Arkansas as helpers shove hard on the rear. Manifest freights are seen grinding their way over the summit of Rich Mountain. Elsewhere locals are racing against the clock before their time expires while yard switchers toil at their unending tasks.

Every class of engine running on the KCS in early 1990 is seen in action here. Its well-known white paint scheme was transitioning to the new gray and you’ll see examples of both. In a grand finale, a hot train with one of the KCS F-Unit slugs sprints across the rolling Texas Division. Here’s a great opportunity to revisit one of America’s favorite railways. 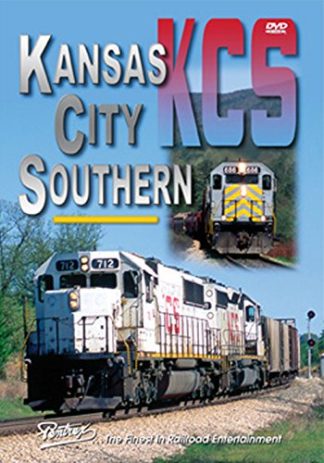