During its long reign, the Monon Railroad reached beyond its modest size to play a major role in the lives of the people it served. If there ever was a Midwestern railroad that achieved storybook charisma, it was the “Hoosier Line”, Indiana’s own railroad. Noted railroad historian Bill Warrick has assembled an amazing collection of vintage footage to bring you a thoroughly entertaining retrospective of the Monon from its humble beginnings in 1847 to its classic period a century later under the direction of fabled railroader John W. Barriger, and then to its takeover in 1971 by the L&N.

The Monon provided north-south transportation of people and goods from the Great Lakes to the Ohio River. Lines from Chicago and Michigan City at the north to Indianapolis and Louisville at the south transected at the town of Monon, giving the railroad first its nickname and later its corporate identity. Through an assortment of rare color and black and while films and photos, you will be led back in time to see the many stops, such as New Albany, Delphi, Lafayette, Bloomington, and others that lined the Monon route.

Fascinating footage details how Army hospital cars were converted into sparkling red-and-crimson streamlined passenger cars led by brand new F-3s as the Monon retired its steam fleet and became one of the first Class 1 railroads to convert entirely to diesel power. You’ll see how the Monon provided transportation to generations of students attending the six colleges along its route, earning it the title “The College Railroad”. Highlights feature the popular Chicago-Louisville “Thoroughbred” train and the 100th Anniversary “Centennial Train”.

Yet, as popular as passenger travel was on the Monon it was freight traffic that provided the profit. There are many scenes of RS2 and BL2 locomotives hauling the freights that served the limestone industry. Here’s your opportunity to relive life aboard the Hoosier Line. 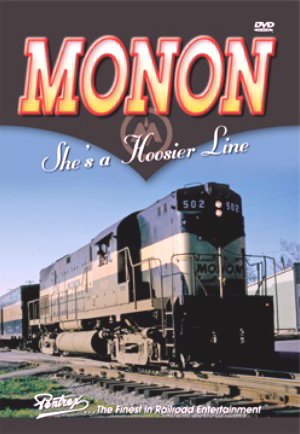 You're viewing: Monon She’s a Hoosier Line [DVD] $25.95
Buy product
Someone in purchased