In this deluxe, all color pictorial, Russ Porter chronicles his 50-year-old coverage of these two interurban stalwarts in more than 220 beautiful, previously-unpublished color photographs.

The North Shore originated in 1894 as a single-track Waukegan street car line, eventually running from downtown Chicago to Milwaukee in 2 hours, 40 minutes, with 30 trains a day each way. Some of the more famous trains the line operated were the Electroliners. Introduced in 1941, they were considered some of the finest interurbans ever constructed in North America. The line was abandoned in 1963 for economic reasons. Russ covers the trains, facilities and terminals of both lines in four color photography.

The South Shore, America’s last interurban, still operates between downtown Chicago and South Bend, Indiana, and continues to haul passengers as well as freight. Begun in 1908 as the Chicago, Lake Shore & South Bend Railway, the line was originally built to high engineering standards and later rebuilt by Samuel Insull. Over the years the South Shore has been noted for its street-running, its orange cars made by Niles, Standard, Kuhlman and Pullman, and its unique 273-ton Little Joes, among the largest electric locomotives ever made. 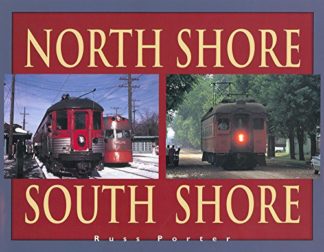