This elegant volume celebrates the 75th anniversary of Trains Magazine, the premier publication in its field.

Drawing on the Trains archive of more than 120,000 images, Jeff Brouws and Wendy Burton have confined their selections for this book to the steam era, selecting 156 photographs that immerse us in that captivating period covering the first half of the twentieth century.

Seen here are legendary locomotives from famous railroads such as New York Central, Norfolk & Western, and Union Pacific and the lost world of the steam short line as well as the intimate details of railroading: gallant locomotive engineers, gritty roundhouse workers, elegantly uniformed conductors. Each photograph is accompanied by an extended caption by Kevin P. Keefe, whose long association with Trains includes stints as editor-in-chief and publisher. Keefe also has written an introductory essay about the history of the magazine and its founder, A. C. Kalmbach, and legendary editor David P. Morgan, and their impact on the field of railroad photography. 156 duo-tone images 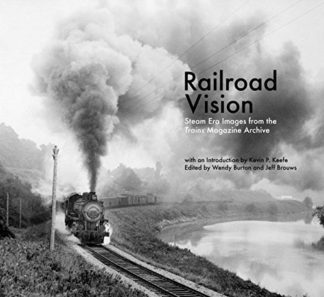