Railroads for Michigan Add to wishlist

In this thoroughly researched history, Graydon Meints tells the fascinating story of the railroad’s arrival and development in Michigan. An engaging and accessible text, the book describes the long-awaited and often-troubled advent of the railroad in the state, the building of which shifted from private to public efforts and back again, amid tumultuous social, business, and political developments. The railroad would come to play a role in almost every critical event in Michigan’s history, including the Civil War, the Granger Movement, and the Gilded Age, before beginning to wane following the arrival of the automobile, the Interstate Commerce Commission, World War I, and the Great Depression. A brief growth spurt during World War II was short-lived, and it was followed by the collapse of several major railroads and the formation of Amtrak and Conrail. Looking ahead to the future of the railroad in the Great Lakes region, Meints assesses the strengths and shortcomings of this revolutionary invention. With careful attention to the personal impact of the railroad, Meints recognizes in brief biographies the many men and women responsible for the development and operation of Michigan railroads, as well as the triumphs, tragedies, and spaces that shaped their lives and work.

Be the first to review “Railroads for Michigan” Cancel reply 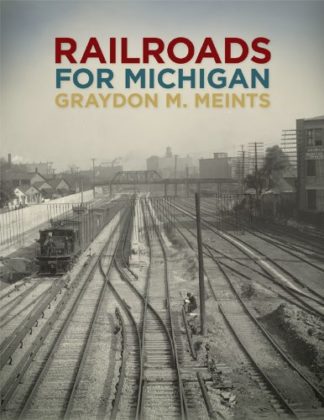 You're viewing: Railroads for Michigan $39.88
Buy product
Someone in purchased