Rails Over the Mountains: Exploring the Railway Heritage of Canada’s Western Mountains Add to wishlist

Journey through the engineering marvels, stations, and heritage sites of Canada’s western mountains.

Ride the rails through Canada’s western mountains to explore the many vestiges of the region’s spectacular and surprising railway heritage. Here is where grand railway hotels were built to attract tourists to the West’s beautiful scenery and bring profit to the railway lines as well. Rustic stations added to the allure. The challenges of conquering the mountains resulted in some of Canada’s most ingenious feats of engineering, such as spiral tunnels and soaring trestles (one of which was featured in The Amazing Race Canada).

Relive the days of rail on a steam train, the luxurious Rocky Mountaineer, or one of VIA Rail’s mountain journeys. Outdoor enthusiasts can follow the abandoned roadbeds of Canada’s more spectacular rail trails, like the legendary Kettle Valley Railway. Also included are some of Canada’s most extensive railway museums, which have helped to bring this vanished era back to life.

Be the first to review “Rails Over the Mountains: Exploring the Railway Heritage of Canada’s Western Mountains” Cancel reply 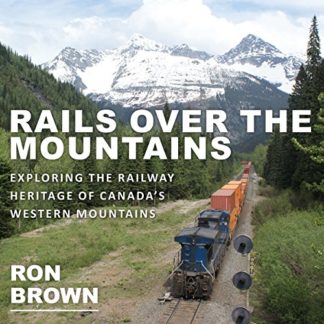 You're viewing: Rails Over the Mountains: Exploring the Railway Heritage of Canada’s Western Mountains $27.60
Buy product
Someone in purchased