Enjoy the sights and sounds of 40-year old GP9, SD7, and SD9 diesel locomotives moving freight over Southern Pacific’s Central California mainlines and branch lines in the 1990s. Nicknamed “Geeps” and “Cadillacs,” these engines revolutionized American railroading when they were introduced by EMD in the 1950s. Their popularity among the railroads was due to their efficiency, ease of maintenance, and operational flexibility. However, old age and hard work caught up to the engines during the 1970s and 1980s, and the majority were retired by almost all Class 1 railroads.

Incredibly, Southern Pacific was still relying on the venerable workhorses in the spring of 1994 when Pentrex captured them on video. You’ll visit SP’s Fresno Line between Bakersfield and Sacramento to view the endangered diesels in action. Watch from trackside as solid sets of Geeps and Cadillacs work hard along the mainline on the Roseville-to-Fresno Local, and catch the Lodi Local as it travels over the Ione Branch out of Galt. Then ride in the cab of Geep #3742 for a thrilling return trip downgrade to the mainline at Galt. This is a fantastic opportunity to witness classic SP diesel locomotives in operation! 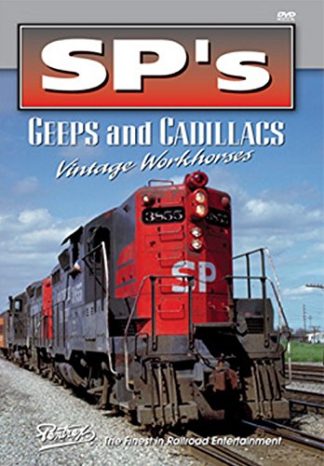 You're viewing: Southern Pacific Geeps and Cadillacs [DVD] $25.96
Buy product
Someone in purchased