Steam on Horseshoe Curve by Pennsylvania Railroad Add to wishlist

Let’s go back in time and see one of the most famous battlegrounds between steam and gradient: Horseshoe Curve. Here is the mightiest steam in the Pennsy stable — in fact on any railroad roster. Rare B&W footage from the 1930s and 1940s shows K-4s, M-1s (Mountains), Js (2-10-4 Texans), the famed I Class Decapod (600 2-10-0s, the largest fleet in the world), even E-6 Atlantics, heavyweight Pullmans and brass rail observations on the curve. Sync sound scenes include the famous Banshee Whistle. See many high-speed run pasts rounding the curve from trackside plus views from on board and in the cab. The Pennsylvania Railroad often required the additional power of a second engine to ascend the 1.8% eleven mile incline that includes Horseshoe Curve. In color footage from the 1940s and ’50s, we see more than 20 shots of doubled and some tripled engines tackle this famous grade including T-1 4-4-4-4s and Q-2 4-4-6-4s. Some engine pairs work as pushers and we even see a couple of steam and diesel combos marking the end of the era of steam! The DVD closes with the arrival of the diesel replacements: a Baldwin Centipede, E-7s and E-8s and, finally, the low-nose hoods. 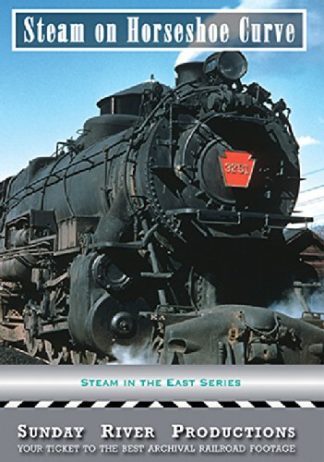 You're viewing: Steam on Horseshoe Curve by Pennsylvania Railroad $97.43
Buy product
Someone in purchased