A Day at Fullerton, California

At the Fullerton Station in Southern California, Amtrak’s Pacific Surfliners, Metrolink commuter trains, BNSF freights, Locals, and other trains glide past the platforms one after the other, sometimes with mere minutes between arrivals and departures. Fullerton is a haven for railfans and photographers and we’ll show you why!

Pentrex camera crews set up to capture the action at this busy location on a beautiful Fall day in 2007. During the 12 hours from dawn to dusk, over 60 trains passed the station and we filmed them all. Amtrak Pacific Surfliners running between Los Angeles and San Diego are seen throughout the day. Amtrak’s Southwest Chief makes a daily stop here. During the morning and afternoon peak rush hours, Metrolink turns into a nonstop parade of trains carrying commuters between Los Angeles and Oceanside or Riverside. The traffic is just as heavy for BNSF freights, with plenty of doublestacks plying these rails. There are surprises, too, such a 12-unit power transfer, maintenance of way, and interesting local freights.

Fullerton Station is located on the BNSF San Bernardino Subdivision twenty-five miles east of Los Angeles. Fullerton Junction, where Metrolink’s Orange Subdivision splits off, is just east of the platform. The traffic on these two Subs keeps the station’s three tracks in constant use, making this area an exciting hot spot. Join Pentrex for a unique look at a favorite railroading landmark: Fullerton, California � from Sunrise to Sunset! 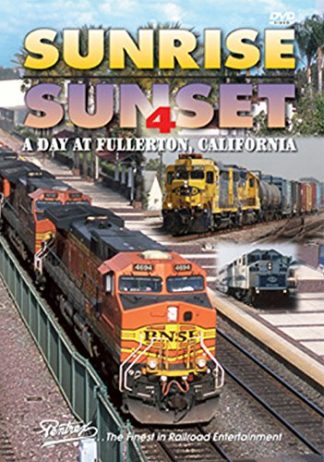 You're viewing: Sunrise Sunset 4 – A Day at Fullerton DVD Pentrex $29.95
Buy product
Someone in purchased