From the Pentrex archives comes a stunning collection of five films produced during the 1940s and 1950s by the Association of American Railroads. Showcasing east and west, steam, early diesel, and electric, this vintage collection brings you a fascinating retrospective of our railroading heritage. Included are:

On the Track SP Cab Forwards, steam powered Daylights, and Black Widow diesels open this film about the railroad’s role in making America a powerful nation. In color.

Lifeline of the Nation Steam dominates this WWII era film about how railroads supported the war effort. The few diesels shown are very early models. You’ll see Hiawathas and Box Cabs on the Milwaukee Road, steam and a GG-1 electric on the Pennsy, a rare streamlined Hudson on NYC’s Empire State Express, and more. In black & white.

225,000 Mile Proving Ground This film takes its title from the 225,000 miles of track in service in 1953 when diesel power was replacing steam. The film shows many F-units and even shots of a Union Pacific gas turbine and Santa Fe billboard refrigerator cars. In color.

Railroads and National Defense Made during the Korean War period, this film shows how the railroads helped rearm the nation while still meeting America’s transportation needs. Pullmans and coaches provide troop transport while other trains haul tanks and trucks for shipment overseas. In color. 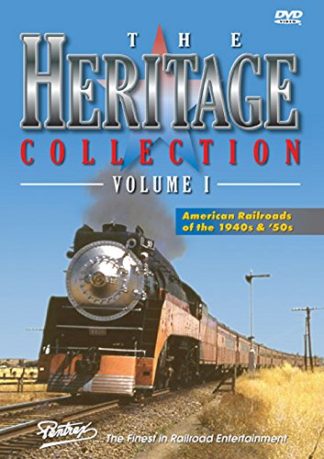 You're viewing: The Heritage Collection American Railroads of the 1940s & 50s [DVD] $29.95
Buy product
Someone in purchased