The Man from Steamtown Add to wishlist

The throbbing sound of the steam-driven pistons and sight of the flashing drive-rods quickened the boy’s pulse. He had heard and seen it all from his bedroom window, but now he had stepped-in person-into the wonderful world of steam. F. Nelson Blount’s interest in steam engines began when he was only four. As he grew up, he studied and wrote about them, often traveling many miles to see one. Yet it was years before he was able to pursue his dream of becoming an engineer. With his keen head for business and unyielding perseverance, Nelson became a millionaire in the seafood industry before he was thirty. Over the years, he did stunt flying and deep-sea fishing. He collected old guns, vintage cars, and finally, a railroad with a “thundering herd” of steam locomotives to preserve the wonderful Steam Age. Thus Steamtown, USA, was born, and Nelson fulfilled his lifelong dream. But none of this brought him true happiness or peace. It took his wife’s near-fatal automobile accident to make Nelson realize that money has its limits, and there are some things only God can do. This led to Nelson’s dramatic conversion and a relationship with Jesus Christ that turned him into a dynamic witness who put hundreds on track for the Lord. Even though Nelson died five years later, he left a legacy that is still impacting people today. The Man from Steamtown tells his amazing story.

Be the first to review “The Man from Steamtown” Cancel reply 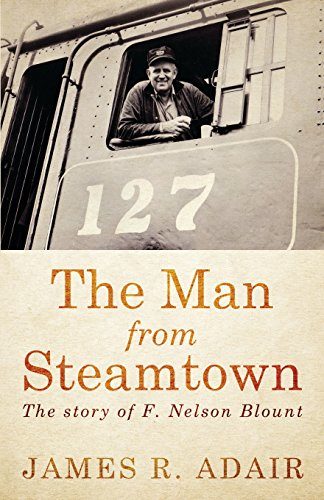 You're viewing: The Man from Steamtown $15.99
Buy product
Someone in purchased