The Standard Railroad of the World
The mighty Pennsy is well represented in this superb video biography. You’ll see steam, diesel, and electric power including K-4s and GG-1s, T1 Duplex 4-4-4-4s, shiny E-units, and even doodlebugs. Penn and Washington Union Stations are shown and you’ll enjoy images of the Broadway and Congressional Limiteds. Also featured are the Northeast Corridor (including the Long Island Railroad) and commuters; inclined planes of the 1830s; Horseshoe Curve, Rockville Bridge, and Enola Yards; the wreck of the Federal Express and the birth of the Metroliners. Producer and director Bill Warrick spent years poring over archival footage and data and the result is this milestone production. Color and B&W.

The Pennsylvania Collection
The Pennsylvania Railroad of the 1950s was a railroading show unlike anything else. With powerful duplex-drive T1s, classic GG-1 electrics, and “next generation” cab unit diesels, the Pennsy was truly a class act. In this video you’ll get to sample that era through a collection of previously released Pennsylvania Railroad publicity films. Included are: “Progress on Rails”, “Wheels of Steel”, “Opening a New Frontier”, and “Clear Track Ahead”. B&W. 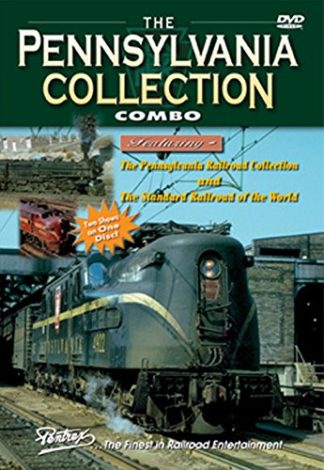