For nearly seventy years, John J. Young Jr. photographed railroads. With unparalleled scope and span, he documented the impact and beauty of railways in American life from 1936 to 2004.

As a child during the Great Depression, J. J. Young Jr. began to photograph railroads in Wheeling, West Virginia. This book collects over one hundred fifty of those images—some unpublished until now—documenting the railroads of Wheeling and the surrounding area from the 1930s until the 1960s.

The photographs within this book highlight the major railroads of Wheeling: the Baltimore & Ohio, the Pennsylvania, the Wheeling & Lake Erie, the Pittsburgh & West Virginia, the New York Central, and the industrial and interurban rail lines that crisscrossed the region. These images capture the routine activities of trains that carried passengers and freight to and from the city and its industries, as well as more unusual traffic, such as a circus-advertising car, the General Motors Train of Tomorrow, and the 1947 American Freedom Train.

Be the first to review “The Steam and Diesel Era in Wheeling, West Virginia: Photographs by J. J. Young Jr.” Cancel reply 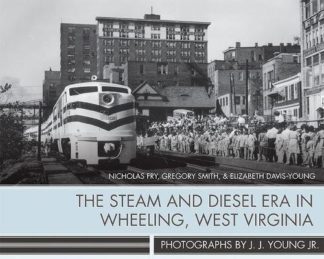 You're viewing: The Steam and Diesel Era in Wheeling, West Virginia: Photographs by J. J. Young Jr. $40.74
Buy product
Someone in purchased