To an Alcophile, there’s nothing sweeter than the wheezing, barking sounds produced by a smoke-belching Alco diesel. In this three-volume series, Pentrex sets out to document an example of every Alco model remaining in operation, exploring the qualities that make these remarkable locomotives so attractive to their fans.

Join us for thrilling action as burbling diesels spew clouds of black smoke and produce that tantalizing Alco sound. You’ll ride in four different locomotive cabs including our favorite, the rare RS-27. Informative production statistics and spotting features are shown for each model. “Mr. Alco” George Hockaday shares his experience and clears up some often misunderstood facts about Alco and its diesels. Those Incredible Alcos put on an amazing show! – Train Video Depot 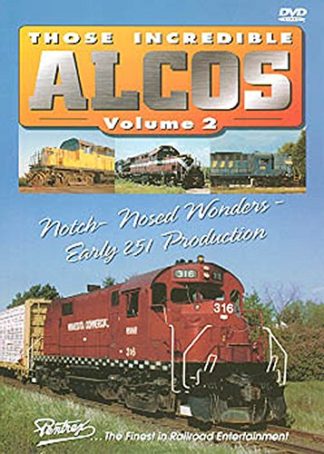 You're viewing: Those Incredible Alcos Vol 2 – Pentrex $29.95
Buy product
Someone in purchased