Timber: Toil and Trouble in the Big Woods Add to wishlist

Has anyone today any conception of the grandeur, the extent, the million board feet a day production…the entire meaning of the forests of the Pacific Northwest-the “Big Woods”? The photographs alone in this absorbing book will instantly transport the reader into this former world. Here was the greatest stand of Douglas fir timber in existence and here was labor for the Poles, Finns, Swedes and Norskies lured out of the Midwest to convert the mammoth trees into the lumber that helped build the West Coast cities. Ralph Andrews presents a fascinating subject-the hope, courage and tragedy in the lives of the men and women who opened up the dense native forests or as the loggers said “brought daylight into the swamp,” and converted the trees into the lumber which built the West Coast cities. Here are many nostalgic scenes showing high climbers, fallers balanced on high springboards, yokes of oxen and up to eight spans of horses dragging logs on skidroad, yokes of oxen and up to eight spans of horses dragging logs on skidroads to flumes, rivers and salt water, early donkey engines, railroads on steep grades, logging camps as well as devastating fires. Andrews’ style of writing is graphic and spirited with strong emphasis on human interest.

Be the first to review “Timber: Toil and Trouble in the Big Woods” Cancel reply 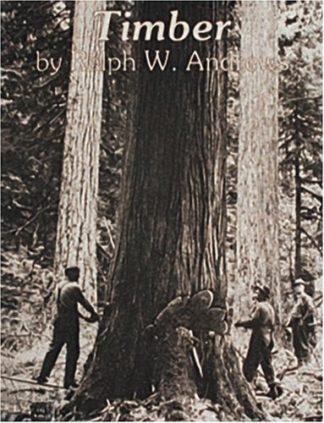 You're viewing: Timber: Toil and Trouble in the Big Woods $14.58
Buy product
Someone in purchased