Twelve Twenty-Five: The Life and Times of a Steam Locomotive Add to wishlist

The against-all-odds story of a World War II–era steam locomotive and the determination of two generations of volunteers to keep it running comes alive in Twelve Twenty-Five: The Life and Times of a Steam Locomotive.

Pere Marquette 1225 was built in 1941 at the peak of steam locomotive development. The narrative traces the 1225’s regular freight service in Michigan, its unlikely salvation from the scrapyard for preservation at Michigan State University, and the subsequent work to bring it back to steam, first by a student club and later by a railroad museum. Milestones along the way include 1225’s retirement in 1951, its donation to MSU in 1957, its return to steam in 1988, a successful career hauling tens of thousands of excursion riders, and its starring role in the 2004 movie The Polar Express. The massive infrastructure that supported American steam locomotives in their heyday disappeared long ago, forcing 1225’s faithful to make their own spare parts, learn ancient railroad skills, and interpret the entire effort for the public. As such, the continuing career of 1225 is a triumph of historic preservation.

Be the first to review “Twelve Twenty-Five: The Life and Times of a Steam Locomotive” Cancel reply 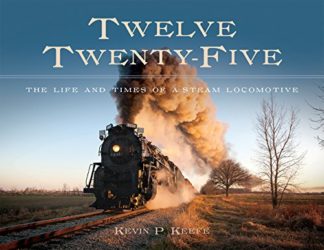 You're viewing: Twelve Twenty-Five: The Life and Times of a Steam Locomotive $37.51
Buy product
Someone in purchased