Union Pacific has always been on the cutting edge of locomotive technology. In the 1950s, it became the only railroad ever to place a fleet of gas turbine-electric locomotives into regular mainline service.

Here is the whole turbine story, from rare footage of an early steam turbine experiment in 1938 to the first gas turbine demonstrator in 1948. UP put 55 production units into service, the largest rated at 8,500 horsepower each-the most powerful locomotives ever built! You’ll see the demonstrators and all three production models (including the unique “Veranda” models) hauling tonnage on scenic mainlines, moving through yards, and being serviced in engine terminals alongside steam engines and classic F-units. Along the way you’ll learn how turbine locomotives operate and will explore the differences and similarities between turbine-electric and diesel-electric units. The saga ends with an experimental coal-burning turbine locomotive built by Union Pacific itself in 1962. A special treat included in this program is a General Electric promotional film produced in 1938 titled “The Steam-Electric Arrives!” – Train Video Depot 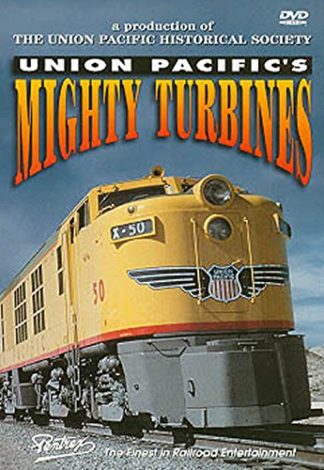